The blog is back with a Steve Coleman interview I did on April 15th, 2013 in Paris. We had this conversation during the rehearsal of Coleman’s band for their concert at The New Morning. Steve Coleman And Five Elements were on tour for the release of their latest recording, Functional Arrhythmias (2013, Pi Recordings). Besides the leader, this version of the band was formed by Jonathan Finlayson (trumpet), Anthony Tidd (electric bass) and Sean Rickman (drums). One of the major forces and greatest innovators since the 1980s in contemporary music, Coleman has focused on the "arrhythmias" of our bodily functions and vital organs for his new body of compositions. Creative drummer Milford Graves had already conducted extensive research on the heartbeat and other rhythms of the human body. Steve Coleman builds on and goes beyond that knowledge upon which he reflects his own musical vision. 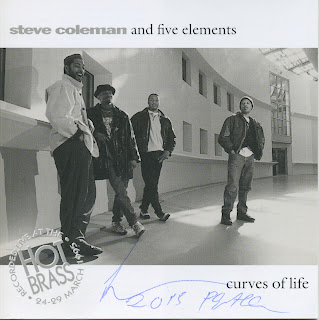 Every Steve Coleman performance is highly creative, energetic, explosive, intuitive, intelligent and knowledgeable and this one was no exception. The band interpreted mostly compositions from the new recording, although, as Coleman indicates below (several hours before the concert), they also played new versions of older compositions. I had Mr. Coleman autograph my copy of the 1995 album Curves Of Life at the end of our interview and surprisingly enough, most of the older compositions played in the two sets were from that very record (such as: The Streets, Drop Kick and I'm Burnin' Up (Fire Theme)). These videos (made by an audience member) are of poor sound quality, however they give an idea of the performance.
I would say that Steve Coleman, while playing compositions based on the human body’s functional arrhythmias, demonstrated with his band that they constitute the individually rewarded parts of an "ensemble" that goes beyond its mere functions. In other words, each band member could have represented a vital organ in order to form together, by their shared experience, a body that transcends its powerful vitality by spontaneously creating something novel on every occasion.

Hayri Gökşin Özkoray: About your last album, I would like to ask if the human body in general or some of its vital organs in particular tend to swing in a natural way? If not, what exactly is the procedure that holds together these functional arrhythmias?
Steve Coleman: “Swing” is not the word I would use. I would use the word “groove” instead. But yeah, sure, the human body grooves. The organs have a certain way they work together and yeah, to me, all life has a groove. You know, that’s the best way I can look at it. It starts with the heartbeat, this is like the engine of the body, because when the heart stops, it’s finished [laughs]. Everything has a groove, a natural way that works together, or should.

HGÖ: As a human being yourself, are you able to distance yourself enough from these bodily functions in order to translate them into an art form?
SC: Yeah, I try. Like everybody else in history, you do it according to your vision. Each person has a different vision, but yes, that’s the subject of the recording. Many of the compositions we will play tonight are from this recording.

HGÖ: So, will you play old compositions as well?
SC: Yeah, we do many things. We do compositions from the new record, we can do some form of an older composition (it never is the exact same form). We can also do compositions we never did before. Spontaneous. Today.

HGÖ: That’s precisely what I would like to ask you about! Spontaneous composition.
SC: Are you a musician?

HGÖ: Only as an amateur. I study the trumpet with a friend of Jonathan Finlayson’s from Oakland [the multi-instrumentalist and trumpeter extraordinaire Josiah Woodson]. I also do some Cecil Taylor stuff on the piano, but that isn’t very serious.
SC: But Cecil Taylor is serious! [mutual laughter]

HGÖ: Of course! Let’s forget about me. What exactly goes on the bandstand when you refer to that phenomenon of spontaneous composition? I have read you saying “the public doesn’t understand that we are composing on the stage”. According to their perception, an already written material is being played, although there is only a spontaneous creation. Do you intervene in a specific way as the spontaneous composer, or is it more of a collaboration that builds on your group interaction and interplay? Is there some kind of Butch Morris thing going on?
SC: It could be all of those things. It’s spontaneous, we never know what it is going to be. If we knew, it wouldn’t be spontaneous [mutual laughter]. We develop it as we play. It’s spontaneous, so it can happen anyway, from one person, from two people... A mistake sometimes can happen from any direction. It’s too big to say how. But, the first thing is that the musicians must have the skill, so that they can do something spontaneous. That takes preparation, you know, the skill takes a lot of preparation. And in fact, we all are still learning. The big thing is the feeling, the ability to feel and hear rhythms and to immediately execute them.

HGÖ: And all the harmonic and rhythmic implications of what is being done by the other group members...
SC: Sure, but if you can’t play the melodies, then the other things don’t matter [laughs]. I mean, if you can’t play the rhythms and the melodies, the figures, all the knowledge you have doesn’t matter. Of course, everything else helps, but also knowing the tradition helps. What all the great musicians before us have done helps us. There is a body of knowledge.

HGÖ: Maybe you are past the research phase now, but I want to ask which musical tradition you would like to explore further?
SC: I am looking at a lot of different things, but it’s not one particular tradition. The tradition I’m most involved in is what is coming from my culture. I don’t look at it as “black music”, I look at it as whatever my culture is. Culture is a group of people in a particular place, at a particular time that are relating in some way. I am from the south side of Chicago and my culture grows from there. Nobody here is from Chicago but me. Although we all are connected by culture, but it is not a color thing. I also had white musicians in my group before. It is more of an understanding. Communication, understanding, connection, having some common experience. That’s the best way I can put it.

HGÖ: You have brought up a generation of brilliant musicians like Ravi Coltrane, Vijay Iyer, Jonathan Finlayson, Miles Okazaki and many others. Altoists like Rudresh Mahanthappa or Steve Lehman aren’t just following your musical vision, but they also have elements of your original sound in their playing. My question is, how would one be able to adopt an M-Base kind of approach without studying directly with you, say half a century from now?
SC: That’s a difficult question to answer. Each person is different. Jonathan didn’t learn the same way as Sean [Rickman] or Anthony [Tidd]. Each one of them approaches the music in a completely different and personal way.

HGÖ: But how can someone approach the music of Steve Coleman without studying directly with you?
SC: They just do what they do. You see this guy, Jean-Paul Bourelly? [who also was in the club during the rehearsal]

HGÖ: The guitar player?
SC: Yes. We grew up together, he lives right around the corner from my family. You know, just two streets over. He is four years younger than me, but we are from the same generation. When he came to New York, he moved in with me. We have a big connection. We don’t play in the same band now, I haven’t played with him in years. But we have a common experience, it’s this experience that you are hearing in the music. It is music, but the source is not musical. The source is the experience and the people. All these people are connected by experience and culture. That is more important than the music. Of course, they have to be able to play. For me, this experience thing is just as important. If Jean-Paul comes on the stage and plays with us, he even doesn’t have to know the music. Because he will know the vibe, the vibration of the music. That’s even more important than a specific music. He can make something, instantly. Jean-Paul and Sean never played together, but they sure can connect immediately. This common cultural experience is deep, it’s beyond notes and rhythms.

HGÖ: So, what was the influence of your experience in the bands of Thad Jones, Cecil Taylor or Dave Holland on your composing and arranging, and musicianship in general?
SC: Yeah, but what do you want to know? It’s a big question, you ask me about three people [laughs].

HGÖ: Alright, let’s go with Thad Jones.
SC: Okay. I was just learning, he was a much older guy than me. I was just trying to find out about the tradition and trying to see different details in the music and things like that.

HGÖ: Then, with Dave Holland, it was more of a mutual relationship?
SC: Because we are closer in age, it’s an age thing. Dave is 10 years older than me. Thad Jones is 32 years older than me. It’s a really big difference. Thad Jones is from the generation of Charlie Parker, John Coltrane and those guys. This is a big difference than where Dave Holland is. Dave Holland is closer to the generation of Michael Brecker, Dave Liebman and all those guys. It’s a completely different generation. So, I started off by learning with the guys of Charlie Parker’s generation: Sonny Stitt, Von Freeman, Sam Rivers, Thad Jones, all these guys were born in the 1920s. That was my first learning experience. And that’s at the foundation of what I do. By the time I met Dave Holland, I was more professional, I knew more. We have exchanged, I showed Dave some things even if he’s older. With Thad Jones, it was not an exchange at all, I was just learning. It was more of a teacher-mentor situation.

HGÖ: In retrospect, I can hear how Dave Holland was inspired by your rhythmic knowledge, it’s obvious in his compositions of the 1990s and 2000s [whereas Steve Coleman was in his band in the 1980s].
SC: That’s because he comes from England, you know? The people who created this music are from the United States. It has some things from Europe and Asia, but the base of it is African-American. So, of course, Dave was still learning things. He knew things from the older generation, from Miles Davis and people like that [at this point, Steve Coleman turned to Jonathan Finlayson and told him to meet his “main cat” Jean-Paul Bourelly].

HGÖ: Having played with Anthony Braxton before, did Dave Holland know what he wanted from an alto player?
SC: I don’t know, you have to ask Dave. He has a long relationship with Braxton from the early 1970s and I don’t know its details. I wasn’t there at the time, I was still too young.

HGÖ: Were you excited about playing with the bassist who accompanied Braxton?
SC: I knew Dave through Sam Rivers. I learned about Braxton later. I played in Sam Rivers’ band where Dave was playing the bass. That was my first connection with Dave Holland. Of course, I knew about him playing with Miles and everything, but I really knew about him personally through Sam Rivers. The thing that connected us was Sam Rivers, not really Anthony Braxton. You know, it was the Sam Rivers Big Band. Sam Rivers was a mentor for me and he was a mentor for Dave too.